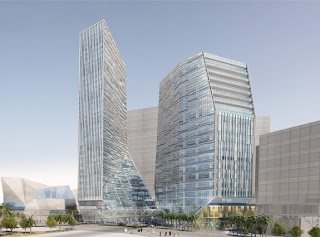 Parcels 407 and 408 are mixed-use, and are developed as one combined lot with two towers – 88 meters and 133 meters tall. The site has its longest eastern face to the Wadi, and along this edge the design has 3 levels of continuous retail and public space. 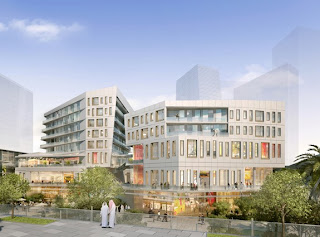 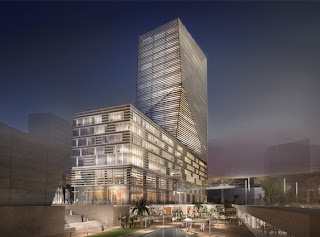 Two bridges enter the site above the access street on the +1 level. The southern edge of the site is a sloped cul-de-sac that provides public access from the street to the Wadi. The shorter tower is situated on the corner of the cul-de sac and the access street. The cul-de-sac is also utilized for access to the garage and service/loading level below grade. Each façade is conceived to adjust to meet the design requirements of its particular orientation while maintaining continuity within the development. 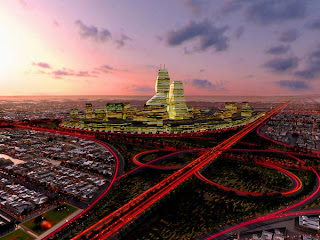 Parcel 209 is a residential development with facades facing a shared cul-de-sac to the north and access street to the east, a public square to the south and the Wadi to the west. The development is connected at the skywalk level to adjacent developments via a pedestrian bridge to the north, and an additional bridge to the south. The access street provides a shared drop-off, as well as access to below grade parking, and a landscaped pedestrian route to the Wadi. At the middle of the combined drop-off is a landscaped pedestrian walkway leading to the residential lobby and beyond, with stair and elevator access to the Wadi below.
Multiple programs for Parcel 214 include office, residential, retail and religious components. A 26-story office tower is located in the middle of the parcel to take advantage of open north and south view corridors through adjoining sites. 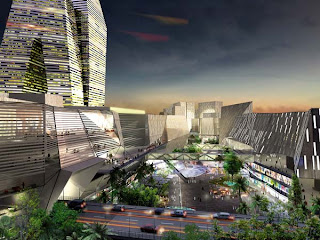 The residential building engages the tower within the lower recessed portion as an architectural gesture and becomes part of the tower façade that faces out onto the mosque and its plaza below. The tower in turn inflects its west and east façades to acknowledge the presence of the mosque on one side and the residential terminus on the other.
Open spaces are defined by two public pedestrian thoroughfares that connect the street to the Wadi on the east and west sides of the tower. One is used for residential entry at ground and skywalk level, while the other is for mosque use. Public access occurs at entry lobbies into the office tower, residences and retail.
Client      :- Rayadah Investment Company
Estimated Value   :- 500m USD
Consultants  :- Main Consultant: Henning Larsen Architects (Masterplan Consultant)
Country         :- Saudi Arabia
Category :- Buildings
Project Type :- Commercial Building
Project Duration From:   Q4 2009 Estimated To:        Q2 2012 Estimated
Status         :- Design
Scope       :- The project calls for construction of Capital Market Authority (CMA) headquarters in King Abdullah Financial District in Riyadh city. The tower is made up off 79 storeys above ground with 3 basement floors. The total built-up area is 185,000 square metres.
Schedule        :-   CMA is currently prequalifying contractors to bid for the deal. Site preparation work is expected to be started by end of 2009. Construction is expected to be completed in early 2012. 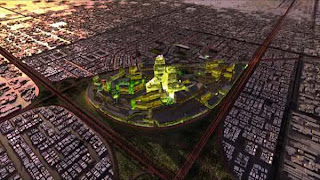 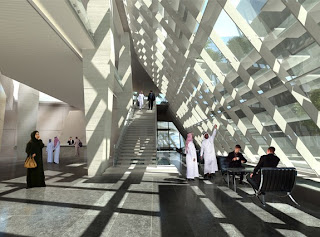