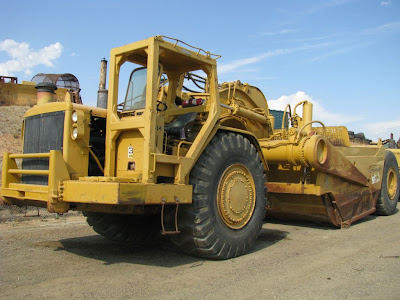 It is a digging and carrying device which picks up its ownload by scraping the ground, and transports it to site. After discharging thematerial it spreads the same over the desired area and returns to the pit sitefor scraping the next load. It consists essentially of a large scoop with acutting edge. The scoop is a bucket or shallow container of steel known as bowlor body.
It is this bowl or body which excavates, transports anddumps the material, where required. Scoop is designed to excavate, load andtransport the material  over a relativelyshort distance upto about 450 meters or  halfkilometer. The cutting edge of this scoop excavates  the earth and the excavated material iscollected in the  body of the scraperthrough the body from the front gate of the bucket. This material is dischargedat the site from the rear gate of the bucket. Thus this machine is the mosteconomical and useful for earthwork operation of a project as it is self-operating to the extent of loading, hauling and discharging material at thesite.
Three types of scrapers are available
Towed Scrapers – these consist of four wheeled scraper bowlwhich is towed behind a power unit such as a crawler tractor
Three Axle Scrapers – these consist of a two wheeled scraperbowl which may have a rear engine to assist the four wheeled traction enginewhich makes up the complement.
Two Axle Scrapers – these have a two wheeled scraper bowlwith an attached two wheeled power unit.